Should we Worship or Repress our Urges? 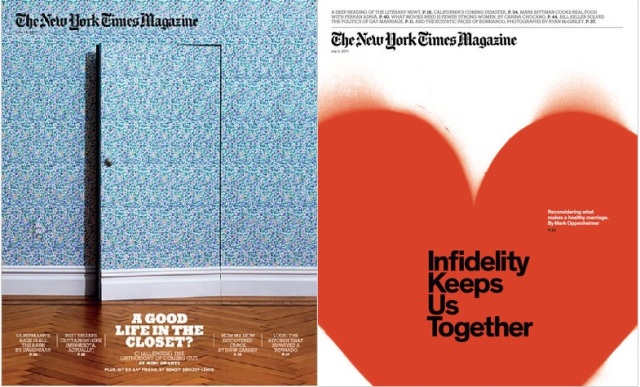 They must have planned it. The NY Times Magazine Editorial staff, that is. On June 19th, the cover story by Mimi Swartz, “A  Good Life in the Closet?”,  was about how Fundamentalist Christian homosexuals are attempting  to prioritize their faith over their sexual orientation, assisted by a small  and controversial group of mental health professionals. Then just two weeks  later, on July 3rd, the cover story by Mark Oppenheimer, “Married, with Infidelities”, explored the implications of blogger Dan Savage’s claim that monogamy should not be a requirement of marriage. A recurring theme in Swartz’s article was the ways that gay Fundamentalists choose to control (or,  perhaps more accurately, suppress) their sexual urges in the service of what they believe to be a greater goal. In contrast, Savage’s viewpoint is that “We can’t help our urges, and we should not  lie to our partners about them.”

What an amazing contrast between two cultures and worldviews. Should we live our lives trying to satisfy our urges or trying to rise above them? Are sexual urges something bad that need to be controlled, or something beautiful that should be celebrated?

It’s funny, because based on my general political and social profile, one would think that I’d have much more sympathy for Dan Savage’s point of view. I have written elsewhere that I believe that a true understanding of Christ leads one to accept and support homosexual love. I have a lot of issues with Christian Fundamentalism. And, as someone raised as a secular Jew I don’t have any hang-ups about ‘sex as original  sin’ and quite frankly can’t imagine why God would have made sex so much fun if  it wasn’t a good thing.

Yet, I was surprised to find myself really irritated with Dan Savage, and strangely awed by the Fundamentalists’ extraordinary (if misguided) self-control. I realize that the crux of my reaction lies in this idea that ‘we can’t help our urges’. Right – of course we  can’t help our urges. But we can help how we respond to those urges.

For example, right now I have an overwhelming urge to polish off the Cote d’Or chocolate bar my mother-in-law just gave me, and watch the last two minutes of the season 4 premiere of True Blood over and over again.  However, I am choosing not to act on those urges, because I have higher  objectives (including not completely succumbing to my suburban housewife reality). Just because I have an urge doesn’t automatically mean I have to, or ought to satisfy it.

But apparently for Savage, the issue is that our urges are often so strong that trying to resist them is just really difficult. As he puts it:

…people – particularly those who value monogamy – need to  understand why being monogamous is so much harder than they’ve been led to  believe.

OK, I’m so sorry, but DUH. Of course being monogamous is hard. Really hard. But just because something is really hard, does that mean we should give up on it?  When the going gets tough, should the tough go cheating?

You know, come to think of it, caring for young children is pretty hard too. But I don’t hear anyone recommending that we should follow Casey Anthony’s example.

And that is why, although I personally think they are misled, I have a strange respect for gay Fundamentalist Christians who are taking such an excruciatingly hard path and trying to fight against their deepest sexual need. Because ultimately the question we each need to ask ourselves is, is this hard thing – this challenge that we face – worth it? For Fundamentalist Christians whose faith is the primary source of meaning in their lives, denying their sexual desires may be the right path. And for those of us who decide to marry – well, it seems to me that the whole point of that exercise is that you are committing to be with that one person for the rest of your life. Through sickness and health. Through stretch marks and beer bellies. Through sexual desires met and unmet. Through temptations of all sorts, and occasional failures to resist those temptations. As Oppenheimer’s article notes, a key point is that people need to be able to forgive when these failures occur. I couldn’t agree more. But as Eve Tushnet points out – “forgiving adultery and  understanding nonmonogamy such that there is nothing to forgive in the  first place…are opposite moral positions.”

Bottom line: as a follower of Jesus, what matters to me is whether peoples’ actions will lead to a world where there is more peace and love – a world where God’s Kingdom has a better shot of coming to earth. Positively affirming love that happens to occur between two people of the same sex seems to me to be something that helps to achieve that goal. Giving  married couples free license to satisfy all sexual urges with whomever they  choose…not so much. While I understand that Savage is simply encouraging greater communication about sexual needs, I think Oppenheimer hit the nail on the head when he wrote:

What if the revelation that a partner is thinking about others creates a shift, one that plagues the marriage? Words have consequences, and most couples, knowing that jealousy is  real and can beset any of us, opt for a tacit code of reticence……We all have many sensitive spots, but one of the most universal is the fear of not being everything to your partner – the fear, in other words, that she might find somebody worthier. It is the fear of being alone.

Underlying Savage’s advice is this belief that the only healthy relationships are those where everything is shared. But it is not at all clear to me that this is true. Contrast this with the words of theologian Henri Nouwen:

There is a false form of honesty that suggests that nothing should remain hidden and that everything should be said, expressed and  communicated.  This honesty can be very harmful,  and if it does not harm, it at least makes the relationship flat, superficial,  empty and often very boring. When we try to shake off our loneliness by  creating a milieu without limiting boundaries, we may become entangled in a
stagnating closeness…. Just as words lose their power when they are not born out of silence, so openness loses its meaning when there is no ability to be closed. (Reaching Out, p. 32)

To my mind, following Savage’s advice is more likely to lead to a situation where someone gets hurt – a world where there is less peace and love, and a whole lot more selfishness.  Which brings me to the final point. This is one of the many ways where I find that atheist philosopher Derek Parfit and Jesus have a lot more in common in their thinking than one would ever expect. Because Parfit, in the first section of Reasons and Persons, outlines how trying to live your life by being completely self-interested can actually be self-defeating – because there are times where to act in your overall best interests you need to –at least temporarily – deny those self-interests.  In other words – the really good things in life require some level of self-denial. Or as Jesus would say:

If any want to become my followers, let them deny themselves and take up their cross and follow me. For those who want to save their life will lose it, and those who lose their life for my sake will find it. (Matthew 16:24-26)

Now trying to do that is really hard. But really worth it.

4 Responses to Should we Worship or Repress our Urges?