What Rick Perry could learn from ancient Islam 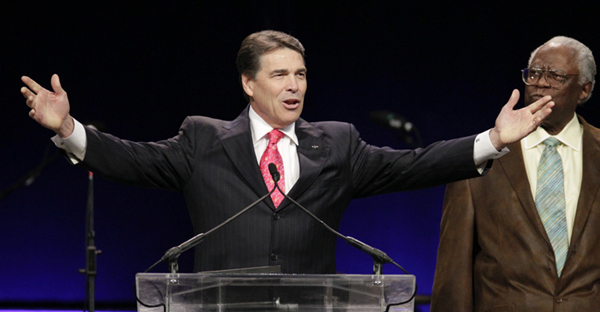 This week, a spokesman for Texas governor Rick Perry made it clear that he intends to enter the 2012 Presidential race. This announcement was made just two days after Governor Perry had presided over a prayer rally attended by 30,000 people at Reliant Stadium in Houston (and viewed online by an additional 80,000).   The prayer rally – called “The Response: A call to prayer for a nation in crisis -was initiated by Governor Perry, promoted using the sizable resources of his office, and included a thirteen minute prayer by the governor. Although the rally was supposed to be open to people from all faiths, the entire tone of the rally was rooted in a conservative Christian ethos, as evidenced by the rally website, which stated afterwards:

We believe we will see the fruit in our nation because young and old, many races, many denominations gathered in unity to worship the name of Jesus.

Not exactly something a Buddhist could endorse.

Coincidentally, during this same weekend I happened to be reading No god but God: The origins, evolution and future of Islam, beautifully written by Reza Aslan. It just so happened that as Rick Perry was using his political office to lead a massive prayer rally, I was reading about how the nascent Muslim community struggled to select their leader after the prophet Mohammed died in 632 C.E. The key question at the time was whether a relative of Mohammed (the prophet’s cousin, Ali) should be selected as Mohammed’s successor, or whether one of Mohammed’s close friends should be chosen. Ultimately, Ali was not selected, a decision that is explained in this way by Reza Aslan (text in parens added by me):

Ali was excluded because of a growing fear among the larger and wealthier clans..that allowing both prophethood and the Caliphate (the secular leadership) to rest in the hands of a single clan….would too greatly alter the balance of power in the Ummah (the Muslim community).  Furthermore, there seemed to be some anxiety among certain members of the community….that maintaining a prolonged hereditary leadership would blur the distinction between the religious authority of the Prophet and the secular authority of the Caliph.

In other words, people in an early 7th century Muslim community understood that there should be some degree of separation between “church” and state. Yet, in 21st century America, we are about to welcome a presidential candidate who has said:

At 27 years old, I knew that I’d been called to the ministry. I’ve just always been really stunned by how big a pulpit I was going to have. I still am. I truly believe with all my heart that God has put me in this place at this time to do His will.

There would be nothing wrong with this statement if it was coming from an evangelical preacher. However, Governor Perry made this statement just this May, at a fundraiser for the prayer rally. So what is Rick Perry? A politician or a pastor? Last I heard I’m living in a country where you aren’t supposed to be both, at least not at the same time.

I’m not the only one who is bothered by this. An Atheist group – the Freedom from Religion Foundation – attempted unsuccessfully to legally bar Gov. Perry from promoting the rally. According to an op-ed piece in the NY Times, Perry had not legally violated the constitutional separation of church and state because rally attendance was voluntary. The Op-Ed piece further notes that “Religion plays too important a part in many people’s lives to be denied a role in the public square.”

While I am no legal expert, I am a bit surprised that the voluntary nature of the rally was sufficient to exclude it from legal sanction. There is certainly legal precedent for considering ‘voluntary’ religious activity unconstitutional. Consider the case of McCollum v. the Board of Ed, in which eight year-old Terry McCollum could choose either to participate in religion classes at his public school or sit alone at a desk in the hallway (a treatment usually reserved for punishing students). Terry’s mother Vashti protested this situation, and the case made it all the way to the Supreme Court, where the court agreed 8-1 that the religion classes were unconstitutional.

Furthermore, while I agree that religion shouldn’t be ‘denied a role in the public square’, I think there are roles that are appropriate and there are those that are not. It is appropriate for a politician to articulate how faith influences his or her decision-making. We elect politicians based in some significant part based on an evaluation of their character and worldview, so understanding someone’s religious orientation is an important part of that evaluation.  Correlated to this, if someone is deeply religious, then it may be natural for him to mention God, Jesus or whoever they pray to as part of a political speech or comment.  It is of course natural as well for that person to be actively involved in his chosen religious institution. However, to my mind, what Rick Perry did in organizing this rally was a whole other ball of wax.  In this rally, Perry simultaneously played the role of religious leader and political leader. To me, that’s just plain wrong.

Given that I am myself a deeply religious person who spends most of my free time either writing about faith or volunteering at my church, you might be surprised that I have these opinions. But here’s why I feel so strongly about this: as someone who grew up Jewish, I know what it feels like to be a religious minority. I remember how it felt going to my high school boyfriend’s Episcopal church, and panicking as I realized everyone around me was going up to receive Communion. I remember how it felt when I went to my friend’s house for dinner and the family all bowed their heads and held hands to say Grace. These were situations I got myself into ‘voluntarily’ – yet I felt threatened and scared.

To my mind, a person in political power – particularly in an office as high as the governor of a state – should not be in the business of urging all of those under his purview to participate in a hybrid religious/political event that is based on the religious beliefs of the majority. It puts those of the minority viewpoint – whether that viewpoint is of a different faith, or no faith at all – in a perilous position.

Perry claims that God has called him to pursue the presidency. For the sake of our country, I hope God changes His mind.

18 Responses to What Rick Perry could learn from ancient Islam